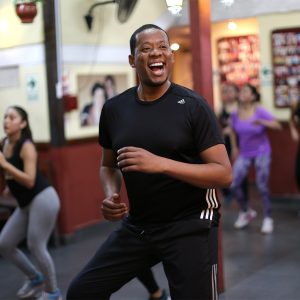 Pierr Padilla Vasquez is a member of the artistic genealogy of the Vasquez family who have transmitted Afro-Peruvian cultural traditions from generation to generation beginning in the late XIX century.

He began his artistic career as a dancer, becoming a member of important ensembles such as Conjunto Nacional de Folklore del Perú and Teatro del Milenio among others. He has participated in shows by renowned Peruvian artists, standing out among them master Victoria Santa Cruz and singer Eva Ayllon. Among his achievements as a dancer he obtained the titles of “Champion of National Champions of Peru of Marinera Limeña” in the years 2010, 2015, 2016, and 2017.

Years later Pierr began his musical career collaborating with Peruvian and international artists in concerts and recordings. With the experience gained he created Colectivo Palenke (2007 – 2016), an outstanding Afro-Peruvian musical group with which he developed a stage language that combined Afro-Peruvian music, dance and Zapateo (tap dance). Later he created and led the musical group Mandinga Project and Cambalache La fiesta Afroperuana. Among the musical productions Pierr has recorded, his participation as Zapateador in the song “El Surco” from the album “A Chabuca” stands out. The song was interpreted by Uruguayan singer-songwriter Jorge Drexler with whom Pierr has shared the stage on various opportunities. This unique version of the song “El Surco” was nominated for Record of the Year at the 18th annual Latin Grammy Awards (2017).

Throughout Pierr’s career as a dancer and musician, he has made artistic tours of America, Asia and Europe. He has also participated in international events as a speaker at conferences, book presentations, and interviews on Afro-Peruvian music. He has written articles on the Peruvian Cajon, and is one of the authors of the book “Personajes Afrodescendientes del Perú y América (African descendent characters of Peru and America)” published in June 2015 by the organization, CEDET (Centro de Desarrollo Étnico/ Center for Ethnic Development). Pierr was the director of Festival de la Música Afroperuana (Afroperuvian Music Festival) in 2016 and 2017 which took place in Lima and was co-produced by the Peruvian Ministry of Culture and La Noche de Barranco Cultural Center.

He currently lives in the city of Oakland, California in the United States where he works as a music teacher for children, youth and adults, and as a musician collaborating with groups and artists from the San Francisco bay area and Los Angeles. He leads the musical group “Huarango”, directs the festival “Afro-Peruvian Fest” and has recently created the international educational platform, “Seminario de Música Afroperuana (Afro-Peruvian Music Seminar)”, which was created with the aim of promoting and disseminating Afro-Peruvian cultural traditions and for this it brings together to the most relevant practitioners, artists and researchers of Afro-Peruvian culture today.