Past Events, Shows and Events 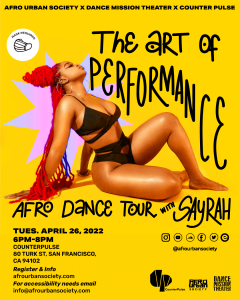 SayRah‘s The Art of Performance Afro Dance Workshop will allow you to delve deep in movements from the motherland. Exploring African street/social dances (mainly West African Street/social movements). These dances are then married in choreography! For this specific class series, SayRah will be focusing on the art of performance! Exploring the various components that make a great performer as if you were on stage or on screen, not just learning moves.

In between touring the world performing, she teaches Afro-fusion dance classes around the United States exploring African street/social dances (mainly West African Street/social movements) with a focus on Nigeria and Ghana.

Afro Urban Society is an exuberant network of brilliant artists and culture workers dedicated to celebrating the unique expressions of Urban Africans through programs, performances and productions.

Dance Mission Theater is a nonprofit performance venue and dance school located in the Mission District of San Francisco, California. The theater is operated by Dance Brigade, a feminist dance troupe with a focus on social change.

This event is funded in part by Dream Keeper Initiative.