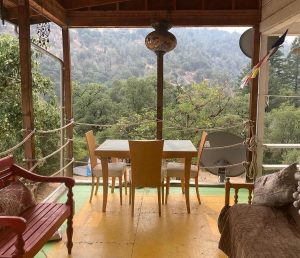 This year marks the first annual Dos Rios Writers Retreat, an artist residency program in Mendocino County.  Our mission is to create space for a diverse range of theater artists to explore writing outside of the distractions of a city environment at whatever stage of the process they are in – be that writing, workshopping, or early performance.  The retreat will culminate with a staged reading at Dance Mission Theater Sept 1.

The land at Dos Rios has been an artistic incubator for Bay Area dance companies including Dance Brigade, Sara Shelton Mann,  Arenas Dance Company and Jose Abad, to name a few!

Tori holds a BA from Harvard and an MFA from NYU Tisch. She has written for The Colonial Williamsburg Foundation’s Electronic Field Trip series (PBS), for which she received an Emmy nomination, and her award-winning one-act play How to Be a Widow recently aired on NPR’s Playing on Air program. Currently, she is commissioned by San Francisco Playhouse (The JonBenét Game) and is developing a new play in residence with New Georges (Invasive Species).

As an actor, Lisa has performed extensively at theaters on both the East and West Coast including, the Cherry Lane Theatre, Vineyard Theatre, Atlantic Theatre, Signature Theatre, Oakland Theater Project, Magic Theatre, Berkeley Rep, etc. She was the first Latina Angel in a major U.S. production of ANGELS IN AMERICA at Berkeley Rep and recently completed a sold-out run of TS Eliot’s, THE WASTE LAND in a drive-in theater version at Oakland Theater Project, the first equity approved live production in California post-pandemic shut down.