This festival is funded in part with support from the Kenneth Rainin Foundation and Grants for the Arts. 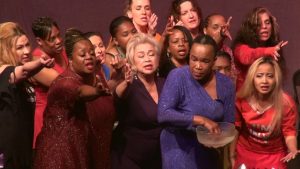 Stories of heartbreak and healing from The Medea Project – Theater for Incarcerated Women/HIV Circle, an ensemble of women working together across backgrounds, race and ages, finding power in telling their raw truths – to themselves and to the world.

Founded in San Francisco County Jail by Rhodessa Jones, The Medea Project brings a unique voice to theater – women whose stories would never be told without the anchor and support of the group’s powerful creative process. And how finding voice is crucial to health.

This Ain’t Your Mother’s Theater Company! is searing dramatic narrative of the deep connections between women’s health and reproductive rights, and the stark realities of rape, of living with HIV, and of women finding their voices through art in a patriarchal and often brutal world.

TICKETS
REGISTER to watch this film via Zoom.
The film will also be shown on Dance Brigade’s Dance Mission’s Facebook Page. (Note: Zoom is best method to view film.)
The film is free. Donations gratefully accepted to support the work of the featured artists and Dance Mission.