Jan 8: Art, Healing, and Public Health: A Film Festival presents “reimagining the city as our own”

Jan 8: Art, Healing, and Public Health: A Film Festival presents “reimagining the city as our own”

This project is supported in part by Grants for the Arts and the Kenneth Rainin Foundation. 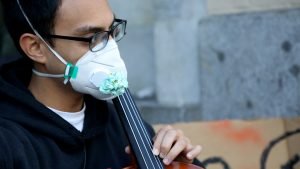 reimagining the city as our own: towards an architecture of inclusion
A Skywatchers video in collaboration with Irene Gustafson
Film runs 21 min. A panel will follow screening.

Who has the right to the city? Who is allowed to linger on its streets, to see oneself in its
landscapes, included and represented in its conceptions of ‘the public’? Who gets to participate
in the conversation about what our cities should be?

reimagining the city as our own ponders these questions through a creative examination of
‘unpleasant design.’ Unpleasant design or ‘hostile architecture,’ as its sometimes called, is the
use of design elements in public space to be intentionally uncomfortable, annoying, or
unusable. Examples include strips of sharp metal, spikes on surfaces where people may seek
rest, plantings, annoying or disruptive sound elements, and metal dividers on benches. These
designs specifically target unhoused and poor people and deter them from using the city
commons for their own needs, most notably–sleeping and socializing. And they make a clear
pronouncement: don’t make yourself at home here; this public space is not for you.

reimagining the city as our own considers how the ubiquity of unpleasant design in San
Francisco’s Tenderloin neighborhood impact its residents, home to the city’s largest number of
working class, low- and no-income people and with the highest percentage of racial diversity in
the area. And the video asks this question: how does unpleasant design’s implicit and explicit
purpose– social exclusion and segregation—impact everyone and diminish our collective
capacity for participation in the city?

Skywatchers began in 2011 in the tenant lounge of a Tenderloin SRO and has since grown into
an ongoing conversation focused on the creation of new performance works emerging from an
enduring collaboration between professional artists and formerly homeless resident artists of
the neighborhood. Irene Gustafson is a San Francisco based writer and documentary media maker who uses
documentary media to raise questions about process, position, representation and the function
of media in our lives.

TICKETS
REGISTER to watch this film via Zoom.
The film will also be shown on Dance Brigade’s Dance Mission’s Facebook Page. (Note: Zoom is the preferred method to view film.)
The film is free, although donations are gratefully accepted to support the work of the featured artists and Dance Mission.